Aristolochic acid (AA) has, in the last decade, become widely promoted as the cause of the Balkan endemic nephropathy and associated renal or urothelial tumours, although without substantial focal evidence of the quantitative dietary exposure via bread in specific households in hyperendemic villages. Occasional ethnobotanical use of Aristolochia clematitis might be a source of AA, and Pliocene lignite contamination of well-water is also a putative health risk factor. The aim of this study was two-fold: to verify if extracts of A. clematitis and Pliocene, or AA by itself, could induce the development of renal or urothelial tumours, and to test the utility of the ribosomal protein p-S6 to identify preneoplastic transformation. Rats were given extracts of A. clematitis in drinking water or AA I, by gavage.  After seven months, renal morphology was studied using conventional haematoxylin and eosin and immunohistochemistry for ribosomal p-S6 protein.  Plant extracts (cumulative AA approximately 1.8 g/kg b.w.) were tolerated and caused no gross pathology or renal histopathological change, with only faint diffuse p-S6 protein (except in the papilla) as in controls. Cumulative AA I (150 mg/kg b.w. given over 3 days) was also tolerated for seven months by all recipients, without gross pathology or kidney tumours. However, p-S6 protein over-expression was consistent particularly within the renal papilla. In one case given AA I, intense p-S6 protein staining of a proximal tubule fragment crucially matched the pre-neoplastic histology in an adjacent kidney section.  We briefly discuss these findings, which compound uncertainty concerning the cause of the renal or upper urinary tract tumours of the Balkan endemic nephropathy. 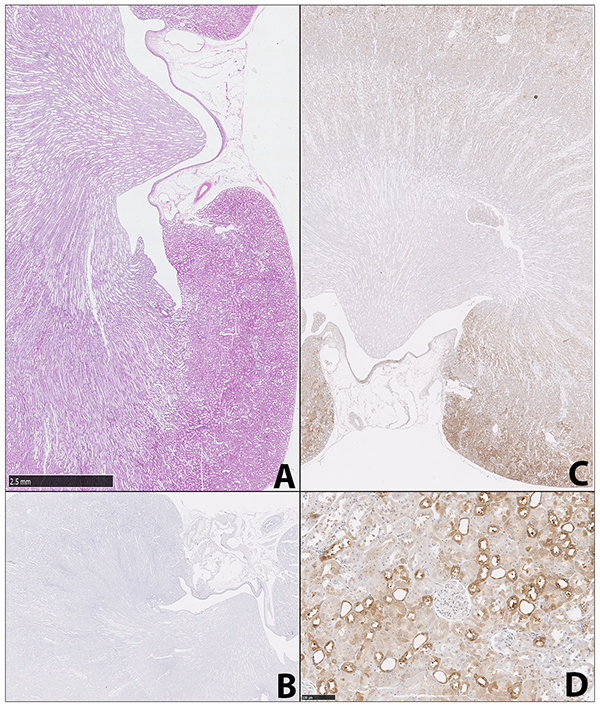 Experiment 2 Rats given AA I alone were 100-125 g (mean 120 +/- 6.4 g). After one month the mean was 186 g, reaching 255 g at seven months, all conforming to standard growth data (17) and showing no persistent reaction to the treatment. Blood plasma creatinine concentration increased from the puberty  value at the start (0.33 +/- 0.06 mg/dL) to 0.45 +/- 0.05 mg/dL a month later and was sustained at 7 months (0.44 +/- 0.06 mg/dL).  Plasma urea was 30 +/- 11 mg/dL at the start, 28 +/- 10 mg/dL after one month and 33 +/- 10 mg/dL at 7 months, not significantly different. Both hepatic enzymes declined slightly in concentration over the period, but values remained within normal range. Animals also given Pliocene lignite infusion as gavage were initially 150-170 g (mean 164 g). At term, six months later, their mean weight was 240 g, similarly typical for this breed. Over the treatment period plasma creatinine (0.45 +/- 0.02 and 0.47 +/- 0.06 mg/dL) and urea (32 +/- 8 and 25 +/- 3 mg/dL) values were maintained, AST was unchanged and ALT decreased only slightly, though within the normal rat range. As in experiment 1, no significant histopathological change was evident in initial H & E sections. In both experiments, ureters and bladders were viewed at necropsy for gross change; none was found and so tissues were not embedded for histology. Figure 2.  p-S6 staining in AA treated kidneys. A,   AA I treated kidneys showing staining for p-S6 protein principally in the papilla, contrasting with Experiment 1; B, detail in papilla (bar 100 μm).

Across the two parts of the semi-acute AA I experiment, immunological distribution of p-S6 protein in kidneys contrasted with that in the chronic plant extract experiment 1. There was extensive interstitial staining in the papilla (Figure 2 A, B), sometimes more clearly defined where the preparation was slightly oblique to the central sagittal plane, showing tubules more in transverse section. However, elsewhere staining could be matched in H & E preparation (Figure 3A) with that of p-S6 to amorphous matrix between tubules (Figure 3 B). Notably also, diffuse weak staining occurred in cortex, usually emphasising the glomeruli, and contrasting with absence in the medulla (as in Figure  1). There was consistent absence of cellular and nuclear proliferation in the transitional cell layer lining the renal pelvis, and of staining for p-S6 protein.   Distribution of apparent p-S6 protein over-expression in response to AA I did not differ with inclusion of Pliocene lignite infusion in the gavage dosing vehicle. Figure 3. Closely matching longitudinal sections through renal papilla stained with haematoxylin and eosin (A) or for p-S6 protein (B) correlating stained areas, probably vascular (note erythrocytes), between some ducts and tubules. Bar 50 μm.

Immunohistochemistry was crucial for recognising a few specific features attributed to renal tumourigenesis. Paucity of p-S6 protein staining in the outer stripe of the outer medulla (OSOM) of one rat in the AA I only treatment group, in which papilla staining is illustrated in Figures 2 and 3, enabled observation of a small proximal tubule element with intense staining for p-S6 protein (Figure 4); positional matching to an adjacent section stained by H&E revealed a focus of proliferation (Figure 4A). That staining revealed the epithelium of this proximal (straight segment) tubule containing a higher concentration of cells than in adjacent tubules; the cells were crowded, appearing hyperplasic or proliferating. A few nuclei were slightly larger than others (karyomegaly) and all of them contain nucleoli. Compared to the other tubules in the region, which had nuclei spaced far apart, there was a tendency in the particular tubule fragment to lose polarity, to initiate a sort of stratification. Less prominent, the cytoplasm in the cells that had enlarged nuclei seemed to have lost some eosinophilia to become clearer. Brush borders also seemed to be deficient. Ribosomal p-S6 protein staining in the tubule centre is intense and diffuse within the cytoplasm, as was also the edge of another nearby tubule fragment, possibly of the same tubule (Figure 4B). Other proximal tubules in the region either had no staining or showed just a weak, apically-concentrated fine granular reaction. Figure 4. Seven months after oral gavage with AA.  Adjacent sections in renal outer stripe of the outer medulla stained with haematoxylin and eosin (A), or immunohistochemically for expression of p-S6 protein (B). Stained nephron fragment(s) are interpreted as indicative of a pre-neoplastic lesion (bar 50 μm).

Discussion In spite of six months of exposure to AAs in drinking water there was no detectable adverse clinical or histopathological effect. The mild, diffuse over-expression of ribosomal p-S6 protein in renal cortex of controls seems to be at least partly an inconsequential feature of the local water supply or of commercial rat diet, which had not been evident in previous UK studies in London (10). However, the A. clematitis infusions, prepared in distilled water, did not significantly affect the intensity of immunohistochemical staining. Notably, the cumulative intake of AA (~1.8 g/kg b.w.) was three-fold higher than that given during half the exposure period (18) and which had caused extensive histopathological changes. Therefore, the present pilot study suggests that, for environmental toxins, it is futile to rely on convenient once-daily gavage or parenteral injection for other than pharmacokinetic studies, because environmental AA seems to be rather well-tolerated in rats if given slowly throughout each day. Humans may be similar. In contemplating what might be necessary for A. clematitis to cause BEN and its tumours, the amount may exceed any realistic human exposure. The semi-acute high-insult administration of AA I was adopted partly to mimic the end-point outcome as described previously (8). Cui et al. (8) had used AA I (> 95 % purity) isolated from Aristolochia manshuriensis Kom, presumably not different from the commercial AA I used here although there is recent concern (19) that highly mutagenic AA analogues remain to be recognised in some species. Of the 14 rats used, 4 developed unilateral kidney tumours, and the remaining animals showed pre-neoplastic renal lesions.  Lesions were small nodules, the smallest of which were already 2-3 mm in diameter, while larger ones sometimes extended through the renal capsule. We were unable to reproduce these results, despite prolonging the experiments for seven months instead of six. Clearly, our present concept of a pre-neoplastic lesion is very different (see below). Interesting comparison can be found in the study of Schmeiser et al. (18) which used Wistar males, gavaged daily at 10 mg AA І/kg b.w., sodium salt in water for 3 months. The experiment terminated 7 months after starting, as in our present experiment.  Among 18 treated rats, most gave squamous cell carcinomas in the forestomach and sometimes also in an ear duct. Other tumours occurred in the small intestine and /or the pancreas. One occurred in a kidney (not studied). Although the treatment had been widely carcinogenic there were no transitional cell tumours. Similarly, even Ivic (2) who first perceived a role for AA in the kidney atrophy of BEN, did not find experimental urothelial tumours. The cumulative dose in (18) had been at least that in experiment 2 here, although gavaged 5 days/week over a much longer period. Clearly there is need for experiments on short and long-term exposure to AA at a range of moderate doses, preferably given in feed (20) and based on US National Toxicology Programme-like rigour (21), to establish the plausible risk of renal cancer particularly in transitional cells of the kidney pelvis. Although we did not observe renal tumours or lesions, we observed features of pre-neoplastic transition in response to AA in some areas of the kidney. There was a close match between p-S6 staining and morphological change as observed by H & E staining.  The principal value of immunohistochemical staining for p-S6 protein hyper-expression has been the highlighting, for the first time, of a small proliferation in the epithelium of proximal straight tubule segments of nephron located in the OSOM, revealing and matching what had not been recognised otherwise in a closely-adjacent conventionally stained section. This histopathological change represents our concept of a pre-neoplastic proliferation and is reminiscent of the periphery of a matching small neoplastic lesion in a rat given protracted exposure to dietary OTA (Figure 2A in 10). Our concept is also consistent with a literature illustration (22). This lesion did not appear to be resolving seven months after the AA insult and thus could have been a sufficient focus for subsequent proliferation towards kidney cancer. Extensive serial sectioning and immunohistochemical staining might have been expected to reveal other examples, if resources had been available. The utility of p-S6 as a marker of pre-neoplastic renal tubular lesions warrants further investigation, but the important feature of the present findings is that of AA-initiated potential carcinoma arising in renal parenchyma, as is the case with another nephrotoxin OTA, but not by proliferation in the transitional cell epithelium of the renal pelvis. To demonstrate the latter experimentally as evidence for AA causing the urological tumours in BEN patients is epidemiologically-desirable to satisfy classical (23) and modern (24, 25) criteria. Currently, human AA exposure evidence for BEN is conflicted (15, 26, 27) and claims that AA is the disease determinant (28-30) appear premature. Conflicts of Interest The authors declare that they have no competing interests. References
1. Krogh P. Causal associations of mycotoxic nephropathy. Acta Pathol Microbiol Scand Sect A Suppl. 1978;269:1-28.